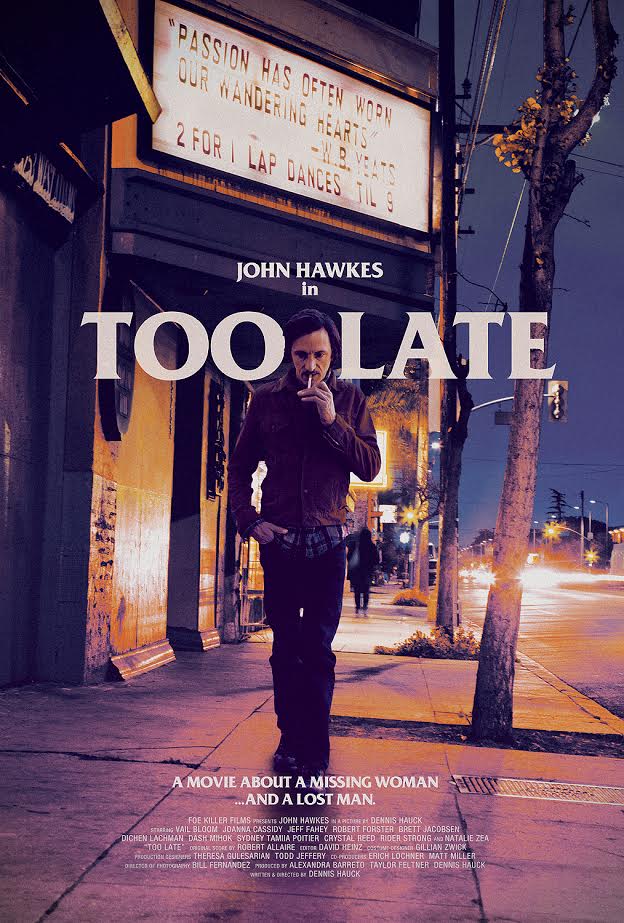 St. Louis Park’s twin annual movie jubilees have announced their fall schedules. Each one, as usual, is nifty in its own way.

Minnesota native and Oscar nominee John Hawkes (recently seen in “Everest”) will attend to introduce the screening of his newest film. “Too Late” is a new take of the hardboiled private eye genre. Hawkes plays Sampson, a detective among L.A.’s drug dealers and strippers, his murder investigation filmed in long, unbroken 35mm takes. Saluting Hawkes’ career, TCFF will also show his work in the alongside Jennifer Lawrence in the backwoods crime thriller “Winter’s Bone,” and his awkward comedic romance with writer/director/star Miranda July in “Me and You and Everyone We Know.”

Also included are much-buzzed-about entries on the upcoming awards circuit. “Room” casts Brie Larson, Joan Allen and William H. Macy in the story of a young woman and her 5-year-old son struggling to adapt to the outside world after a decade of forced captivity in a one-room cage. The film, based on the best-selling novel Emma Donoghue, won the Audience Award at this fall’s Toronto International Film Festival.

Oher highlights include “The 33,” starring Antonio Banderas and Juliette Binoche in a fact-based drama about the Chilean miners who were trapped under ground for 2 months; Charlie Kaufman’s new stop-motion film “Anomalisa,” and “Brooklyn,” starring Saorise Ronan as an immigrant from 1950s Ireland to New York drawn between two distinct men, two distant countries, and two very different ways of life.

Details on the full schedule, ticketing, special events and TCFF membership can be found on twincitiesfilmfest.org.

The venerable Twin Cities Jewish Film Festival turns 22 years old with its latest installment, offering a dozen showings Oct. 22 to Nov. 1. (If you can’t wait, there are also two pre-fest screenings Oct. 11 and 19.) The settings range from Minneapolis’s Sabes Jewish Community Center to the Jewish Community Center of the Greater St. Paul Area, the St. Anthony Main Theatre and the Science Museum of Minnesota’s IMAX Theatre.

Two of this year’s most acclaimed offerings are documentaries. “Jerusalem,” showing at the IMAX auditorium, is a giant screen film by National Geographic. It explores the ages-old appeal of the site to Jews, Christians and Muslims through the experiences of three teenage girls from each faith. Acclaimed documentarian Albert Maysles’ final film, a biography of feisty fashionista Iris Apfel, is a delightful joyride through New York’s garment industry. The outspoken Apfel, 93, daily wears a standout blend of cheap and priceless fashion, winning her gala displays in New York’s Metropolitan Museum of Art and retirement-age fame. Girls flock to her clothing-store classes on dressing with style, loving her instantly.

The exhibition contains “His Wife’s Lover,” a 1931 museum piece called the “first Jewish musical comedy talking picture,” along with much newer features. “Are You Joking?” follows a hapless paralegal through her quest into the world of stage comedy, while “Diplomacy” dramatizes a Swedish consul’s effort in 1944 to persuade  the German general in charge of occupied Paris to refuse Hitler’s order to destroy the city.
Several filmmakers will will be hosted to discuss their work at receptions before or following the screenings. For more information on scheduling, passes, ticketing and special events, visit tcjfilmfest.org.