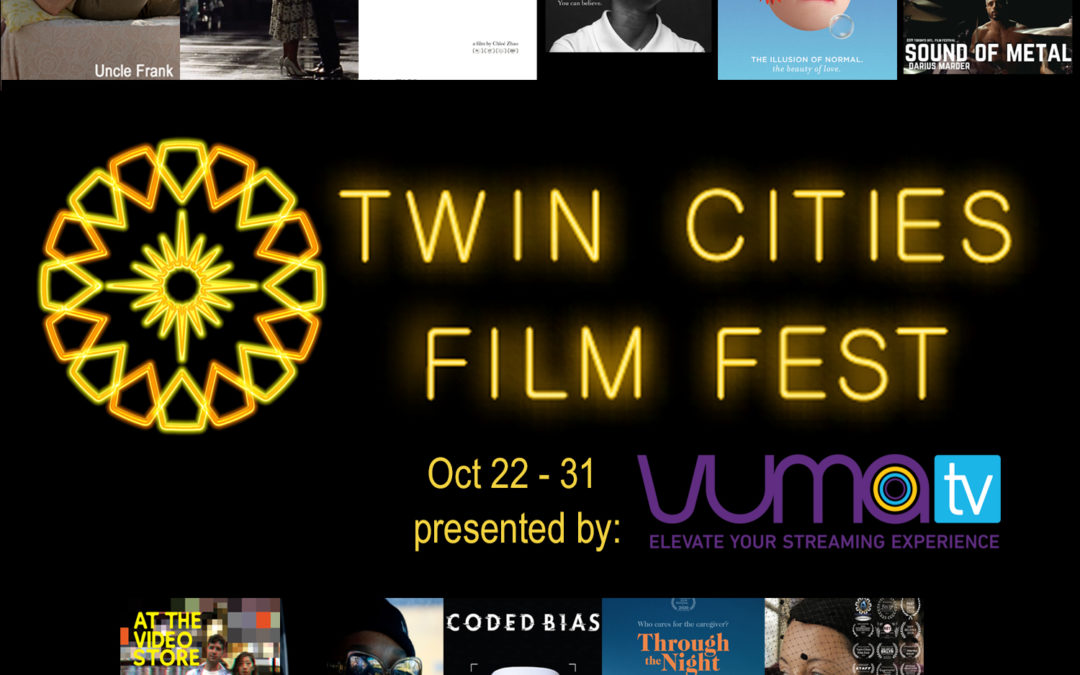 For first time ever, TCFF to showcase catalog of premieres, documentaries and Midwestern productions via hybrid model that includes physically-distanced screenings, live-stream exclusives as well as digital on-demand. 2020 program to include special series dedicated to technology, female filmmakers and BIPOC communities

Minneapolis, Minnesota (October 1, 2020) — The Twin Cities Film Fest, presented by VumaTV, announced its full 2020 film schedule Thursday, set to screen Oct. 22-31 via a ‘Hybrid’ format that will include online on-demand streaming through TwinCitiesFilmFest.org as well as select distanced screenings at the Kerasotes ShowPlace ICON Theatres at The Shops at West End. TCFF 2020 marks the organization’s 11th anniversary and arrives at a time where many visual arts organizations are struggling to stay open and continue providing their service of bringing communities together.

“There was never a doubt that TCFF was going to take place this year,” said Jatin Setia, TCFF’s Executive Director. “We know the positive impact that film arts, independent storytelling, and unique perspectives can have on the fabric of our culture and community.  We wanted to lean into the opportunities and hit ‘fast forward’ on what our organization could bring to the wider arts conversation during this most difficult year. I’m so proud of my team and our supporters in making sure that TCFF not only happens this unprecedented year, but it leaps forward and innovates new ways to bring a cinematic community together to share a vision — and a conversation.”

The festival opens Oct. 22 with the acclaimed documentary Black Boys, an intimate, inter-generational story that offers profound insight into black identity and opportunity at the nexus of sports, education and criminal justice. Director Sonia Lowman will appear in a pre-recorded conversation.

The majority of this year’s festival selections will be available via the TCFF STREAMS platform at TwinCitiesFilmFest.org, a new TCFF initiative that launched earlier this year to give a platform to MN Connected filmmakers.  The online platform will feature premieres of award winning narratives, documentaries and shorts curated from all across the country.  Several notable film categories include TECH Series, HER Series, MN Connected films, and the newly launched EMPOWER Series focused on BIPOC stories and storytellers.

Every year, the Twin Cities Film Fest identifies a Social Justice Cause and programs a special series of films to call attention to a specific social issue. This year’s cause is “affordable living” and the film series includes stories spotlighting housing, healthcare, childcare and eldercare.  Through the generosity of local companies (Spire Credit Union, Dominium Apartments, City of St. Louis Park and AARP Minnesota), all films in the Changemaker Series will be presented free to all viewers. Minnesota Lt. Gov. Peggy Flanagan is being presented with the 2020 TCFF Changemaker Award at the festivals’ Virtual Gala (Oct 2nd – 4th)  in recognition of her work towards affordability.

TCFF’s complete 2020 schedule is listed below.  Tickets are on-sale starting tomorrow, Oct 2nd. All of the In-Person theater screenings at the ICON Theaters will be reserved for TCFF Donors, Members and Sponsors on a first come first served limited capacity.  To learn more about how to attend these screenings, please visit www.twincitiesfilmfest.org.  For all of the ONLINE films, simply check out the lineup on the website and purchase the films.  All films will be available for purchase for $9/film with a few offered for free.  An ‘All Access STREAMING Pass’ is also available for $50 on the website providing access to ALL of the 70+ films online.

For more information on films and attendees, or to book your reserved seats, visit www.twincitiesfilmfest.org

Twin Cities Film Fest (TCFF) is a Minneapolis-based 501(c)(3) non-profit arts organization founded by Executive Director, Jatin Setia. The Twin Cities Film Fest is an annual mainstream film festival that caters to the general public with one simple goal: To offer audiences access to the best films the global industry has to offer, to stimulate economic activity in the Twin Cities and to offer filmmakers a premiere venue at which to premiere their work. TCFF welcomes donations throughout the year from members, individual donors, volunteers, or corporations. To learn more about TCFF, events, film submissions or to donate, visit twincitiesfilmfest.org.

Founded in 1909 with a single storefront nickelodeon, Chicago-based Kerasotes Showplace Theatres introduced a “new era of moviegoing” with its Showplace ICON Theatres. Owned and operated by third generation family, Tony and Dean Kerasotes, the Company plans to debut Showplace ICON Theatres in additional major U.S. markets, including Boston, Mass.; Washington D.C. and surrounding suburbs; and Laguna Hills and the Silicon Valley in Cal.  For more information, please visit us online at http://www.showplaceicon.com.

ABOUT THE SHOPS AT WEST END

The Shops at West End is an exciting mixed-use development located in the highly affluent suburb of St. Louis Park, just minutes from downtown Minneapolis. Located at the intersection of I-394 & 100, The Shops at West End features restaurants such as CRAVE and THE LOCAL, and various retailers. It is a joint-venture development of Duke Realty, Inc. and Jeffrey R. Anderson Real Estate, Inc. For a complete list of West End tenants, please visit www.TheShopsAtWestEnd.com.

Vuma’s name quite literally means “all together” and that meaning fluently translates into the mission of the streaming platform: to bring authentic multicultural content into the global limelight. Led by Founder and CEO Alberto Marzan, VumaTV’s vision is to provide curated content for an underserved global multicultural audience— but the platform isn’t meant to promote differences in a way that encourages those audiences to wall themselves off from the rest of the world. On the contrary, Vuma strives to provide a streaming service without borders, sharing content that intentionally recognizes and celebrates race, ethnicity, and intellect around the globe. The VumaTV app is available for download and streaming on iOs, Android, AppleTV, AndroidTV, Amazon FireTV, Roku, and www.vumatv.com.

(Only Available to Sponsors, Donors and Members)