What a day! What a night! It’s the ninth year I’m covering TCFF (yep that’s right, I’ve been with this amazing film fest since its inception) and they’ve done it again. They had not one but TWO opening night film and they’re both amazing!

The 11-day film fest is off to a smashing start!!

“Time For Ilhan” is an eye-opening documentary that follows the 2016 Minnesota House of Representatives campaign of Ilhan Omar, a Somalian immigrant who sets out to unseat a 43-year incumbent and other challengers.

I love when a film title captures the essence of the film so perfectly, and Time For Ilhan is one of those films. Many of you know Ilhan Omar as the first Somali-American legislator elected to office in the United States and there are certainly many ‘firsts’ in regards to her life and career, and what she represents. In fact, one audience member asked her how it feels like to represent not just her Democratic party, but SO much larger than that… that is her Somali-American community, the Immigrant community, her race, Muslim women, and women in politics in a very much white-male-dominated world.

Interestingly though, at the time she was running in the DFL primary for the Minnesota House of Representative, she was running against a 43-year incumbent (Phyllis Kahn, who happens to be a Jewish-American) and a fellow Somali-American Mohamud Noor. Though we know the outcome already (she is now the DFL nominee for U. S. Representative), the film was still quite suspenseful as well as heart-wrenching in the way they depict a political race, especially involving the underdogs.

I appreciate and admire filmmaker Norah Shapiro‘s astute directorial sensibility in making an important film that’s also entertaining to watch. I love that aside from the political campaign, she took the time to show Ilhan’s family life… her playing with her three kids, having dinner with her family and interacting with her supportive Somali-American husband, Ahmed Hirsi. There’s more than just Ilhan the politician, but we see her as a well-rounded, complex, layered individual who has the courage and drive to fight for what she believes in. Additionally, the film also gives insights, especially for people like me who aren’t much into politics, just what goes into campaigning and how intricate that process is.

Naturally, given the nature of Ilhan Omar’s ethnic background and who she represents, this is quite an unprecedented political race that makes for a fascinating documentary. I have to give a shout out to DP Chris Newberry (who’s also the film’s producer) for the wonderful visuals showcasing the beautiful state of Minnesota.

What a treat it was for those attending the TCFF screening to see Ilhan Omar herself up on stage with director Norah Shapiro. She was as cordial and well-spoken as you see her on the media. As a woman of color and US immigrant myself, she certainly inspires me to be courageous and pursue my dream, no matter how seemingly-impossible that is.

A working-class Italian-American bouncer becomes the driver of an African-American classical pianist on a tour of venues through the 1960s American South.

I have to say that this film had me hooked right from the poster and the trailer. But when I first saw that the director is Peter Farrelly, I had to do a double take. I mean he’s known for his comedies like Dumb & Dumber, Something About Mary, etc. and I expected this to be a drama. Well, this is one of those films that play with your expectations… and Farrelly certainly succeeds in finding the perfect balance of comedy and drama in capturing a poignant and heart-warming true story.

The film is based on a screenplay written by Nick Vallelonga, who happens to be the son of Tony Lip, one of the two protagonists of the film. It’s a tale of unlikely friendship as they embark on a journey that changes their lives forever. I knew that they had a winner when they cast Viggo Mortensen (a Danish thespian who’s completely believable as an Italian) and the oh-so-regal Mahershala Ali as a Jamaican-American classical pianist Don Shirley, a musical genius. The title refers to an actual book, a road-trip guide to services and places that’s open to Blacks during a time of pervasive racial discrimination. Without giving too much away, the film touches on the reason Shirley chose to do the tours in the Deep South in the 60s, when he could’ve easily chosen to stay relatively safe in the North. I’m not going to write the line here as it’s better for you to discover it for yourself when you watched it. It’s one of the moments I teared up in this film.

The racial injustices Shirley face is a deeply serious subject that’s maddening and heartbreaking, and the film doesn’t shy away from that. Yet there’s a lightness to the film that comes from the script AND the performances of the two actors. Some scenes, like the KFC scene in the car, is a riot. Yet the hilarity doesn’t undermine the gravity of the subject matter. There are many memorable moments where these two extremely-different people clash day in and day out. But much to their surprise, each of those moment actually brought them closer to each other. Each of them is a changed-man after the trip, and that transformation feels real and believable, not at all tacked-on.

It’s the kind of film that sparks conversations about race and economic disparity, even ‘class’ system if you will, without being too heavy-handed. One thing that touches me deeply is how the film depicts loneliness. As they say, it’s ‘lonely at the top’ but it’s even more lonely for those who don’t feel like they belong anywhere. Despite his amazing talents and accomplishments, and also because of it, Don Shirley never felt like he can fit in any racial group, and that’s harrowing to watch. It’s one thing to depict racial inequality by presenting facts, which is all fine and good, but it’s truly a moving experience when it’s told in such a personal level and see how hearts are being transformed by personal relationships. 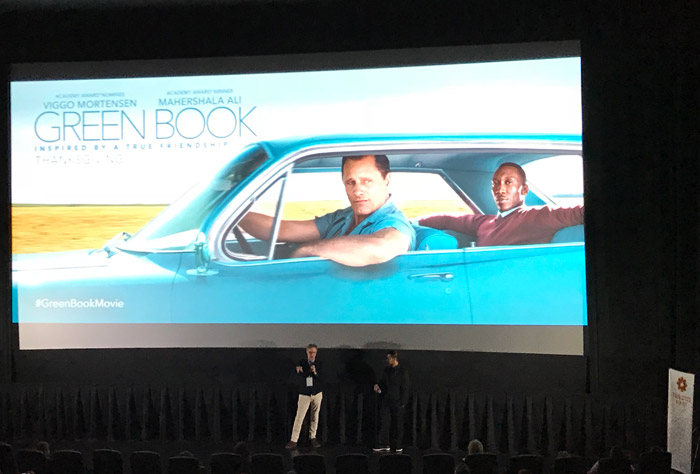 Producer Jim Burke spoke at the Q&A afterwards and shed a light about some details about the film. One thing that caught my eye in the credits is that Octavia Spencer is listed as Executive Producer. Well, Burke said that she was asked to collaborate given that she grew up in the South during that era, in order to give an authentic depiction of the story. Burke also mentioned that Mahershala Ali gave a lot of input about the ending, which is definitely a memorable one.

Go see this movie when it comes out near you. You’ll laugh, you’ll cry, sometimes both at the same time… but one thing for sure, you’ll come away feeling grateful you get to know a little bit about Don Shirley and Tony Lip, and their incredible journey together.

Any thoughts about the two films I mentioned above? Let’s hear it!